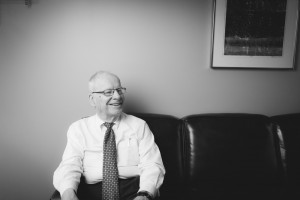 Thomas “Tom” Carpenter has been a mainstay at Grefe & Sidney since the firm began in 1971.  His sage advice, caring nature, and highest ethical standards have provided an excellent example for all attorneys at the firm and within the Iowa Bar.  It is with appreciation and best wishes that we announce that Tom is retiring after 57 years in the practice of law.

Tom is a Harlan, Iowa native and attended Grinnell College, graduating in 1954.  After a few years in the Air Force stationed in Houston, Texas, Tom and his wife Dottie returned to Iowa so Tom could attend law school.  He graduated from the University of Iowa College of Law in 1960.  Following graduation and passing the Bar, he began practicing law in the Des Moines area, first with the law firm of Schaetzle, Austin and Grefe from 1960 to 1962, then with the firm Austin, Grefe & Sidney from 1962 to 1971, and then being a founding member of Grefe & Sidney in 1971.

Tom has spent the majority of his time in the areas of estate planning, probate, business, and tax law.  He has worked with thousands of clients over the years.  One of his favorite areas of practice was representing small family-owned businesses in the Des Moines area. With these clients he was able to help solve their problems in real time, while developing strong personal relationships with them and their families.  In fact, many of these families, their children, and grandchildren have continued to use him as their attorney over the years.

In 57 years, the law and the practice of law have both changed tremendously.  Technology and accessibility to information have shifted the way attorneys work.  Tom has taken it all in stride and is grateful for all he has been able to accomplish during his career.

In retirement, Tom plans to relax and was told by friends “not to commit to anything.”   He is looking forward to spending time with his two children, Mary and Jim, and his grandchildren, as well as spending time at the family cabin in Minnesota.  His first retirement journey will be a trip to Eastern Europe.

Tom has been a hard worker, having excellent rapport with clients and understands the law of his practice areas better than anyone.

From all of us at Grefe & Sidney, thank you Tom for all the memories, the advice, and for truly being “one of a kind.”